Recently I was given the opportunity to introduce the topic of the Fukushima Diaster and its implications to an energy discussion group. This is a post to share the handouts and some offshoot media I have from this.

Also, looking for good maps of the plant locations, epicenter, etc, I realized that nothing out there really fit what I wanted to show for the full picture. So I brushed up on making kml files and made one myself.

For viewing in Google Earth, see my community post.
For more simple access, see the Google Maps version (this is actually nothing other than me uploading the prior one to Google maps).

Icons are Creative Commons Licenses too, Click for Source

Japan gets 30% of its electricity from nuclear power, which is motivated largely by the lack of domestic energy resources. If you look at a history of energy consumption in industrial Japan, the domestic supply for anything like coal, oil, gas, etc is hardly a blip.

Japan has 52 nuclear reactors spread over 17 sites all over the nation. The 5 plants on the North-East coast of Japan were shut down by the quake, totaling about 13 GW. Looking at history, it could be 2 years or more before many of these can start up again. 3 plants were hit particularly hard by the tsunami, both Fukushima plants and the Onagawa plant. Ongawa was far-and-away the closest to the epicenter. 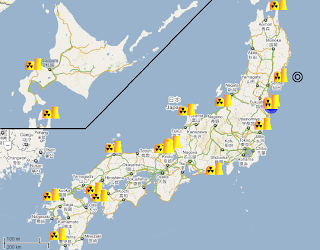 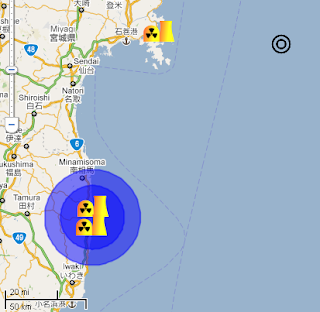 Chain of events:
Key Concepts for understanding the event:

Decay Heat ‐ A nuclear reactor keeps producing heat after shutdown, and this decreases over time. If there is not a constant flow of water to remove the heat, the temperature will increase, and the ultimate consequence is that rods break and fuel melts, releasing radioactivity.

Batteries ‐ Cooling systems powered by the steam from the reactor itself or by natural forces are available to keep the reactor cool for only a limited amount of time since batteries are needed to operate valves. Japan was said to have 8 hours worth of batteries (although they may have lasted longer), which wasn’t enough, and most U.S. plants have 4 hours worth.

Containment ‐ Reactors are designed to fail by being built in the middle of a structure that can hold significant pressure, keeping the radioactive particles inside during a meltdown. The containment is the inner structure in this type of BWR, this area is filled with Nitrogen gas so Hydrogen won’t explode there.

Hydrogen ‐ At high temperatures this (very typical) fuel type chemically reacts with the water to produce free Hydrogen gas. Because Hydrogen is volatile in air, nuclear safety includes devices to recombine Hydrogen and Oxygen without a dangerous explosion, or prematurely ignite it before it becomes too much. These did not work at Fukushima, certainly in part, due to the lack of power. 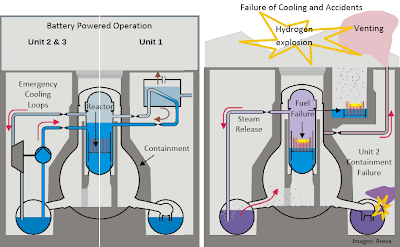 Many are already recognizing a near-term impact on the new nuclear plant builds in the United States. In fact, the South Texas Project main stakeholder has completely backed out of their new build, directly citing uncertainty stemming from this event. It needs to be said that a serious slowdown in new builds will likely result in decreasing the amount of energy we get from nuclear power. A graph from the LWR Sustainability sums up the situation rather well. Keep in mind, that green sliver is looking highly precarious, and even the orange is coming under attack. This will impact the ability reduce reliance on coal and natural gas.

Critical Question for Energy Policy:
New or old? How should the United States weigh the benefits and risks of stretching our current fleet, building new reactors, new nuclear technology, and other energy options?